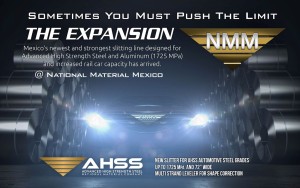 Steel service center National Material of Mexico hosted a Hollywood-style open house event on November 28th, 2017 to show customers, suppliers, and government leaders the outcome of their latest project that is expected to create 50 jobs. According to Carl Grobien, Vice President and General Manager, “To meet the demands of customers requiring advanced high-strength steels, we needed to make this investment. We decided to increase slitting capacity and improve our process for unloading and handling shipments to become more efficient and responsive to our customers’ needs. To make room for the slitter, we moved our existing office space to a brand new modern office building. These are very exciting times for our company that will benefit our customers.”

Among the distinguished speakers at the event, we heard from:

About the Author: Grace Sharington